In order to set up mouse controls for “Motion Controls and IR”, reset the controls to default. If you are playing Super Paper Mario, make sure Sideways Wii Remote is ticked.

When you need to enter “Tube Mode” in Chapter 4, the game asks you to rapidly rotate your stick. However, using a keyboard where i.e. WASD is mapped to Up/Left/Down/Right, this is physically impossible. An easier way is to map something straight in a line i.e. 1324 in the top number row to Up/Left/Down/Right.

Then enable the Vulkan renderer and build:

Copy the core to the RetroArch directory:

Mednafen, being an accurate PSX emulator, doesn’t support 32-bit color depth. Patching it to disable dithering will result in color banding as expected, which looks something like this: 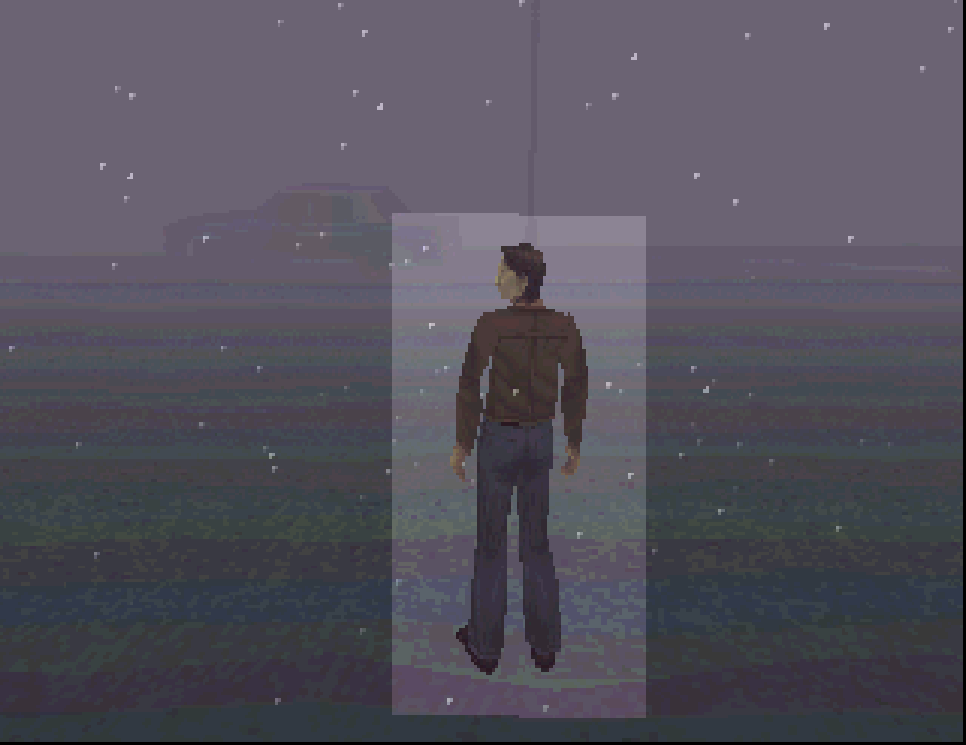 However, the beetle-psx-libretro core for RetroArch supports 32-bit color depth, but it’s a little tricky to setup. 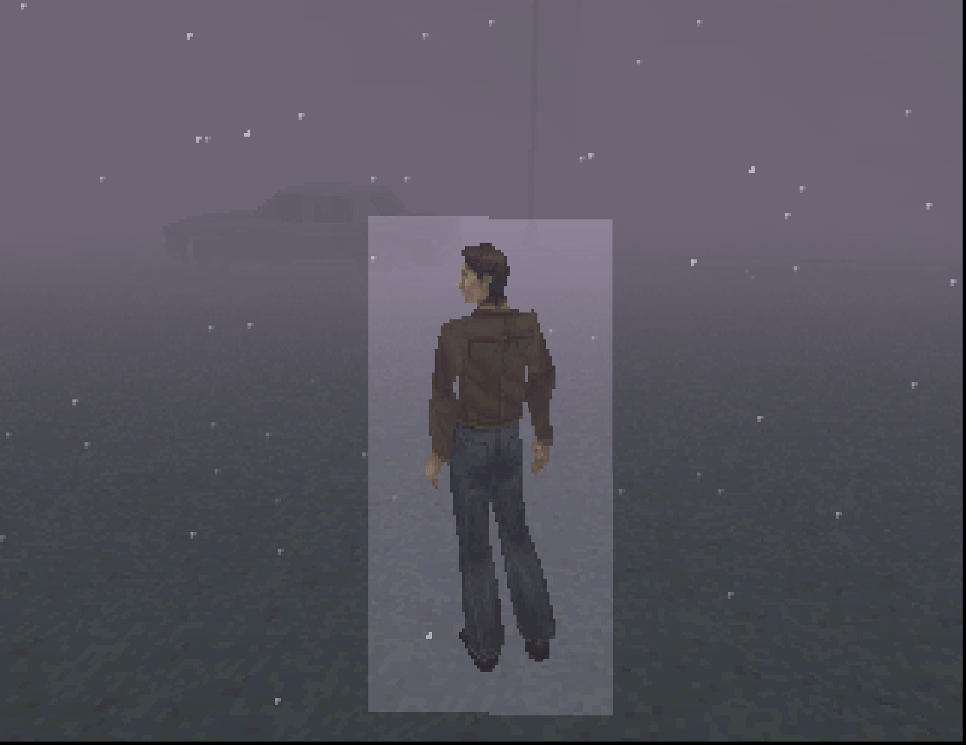 On the other hand, this is what it looks like with Vulkan: 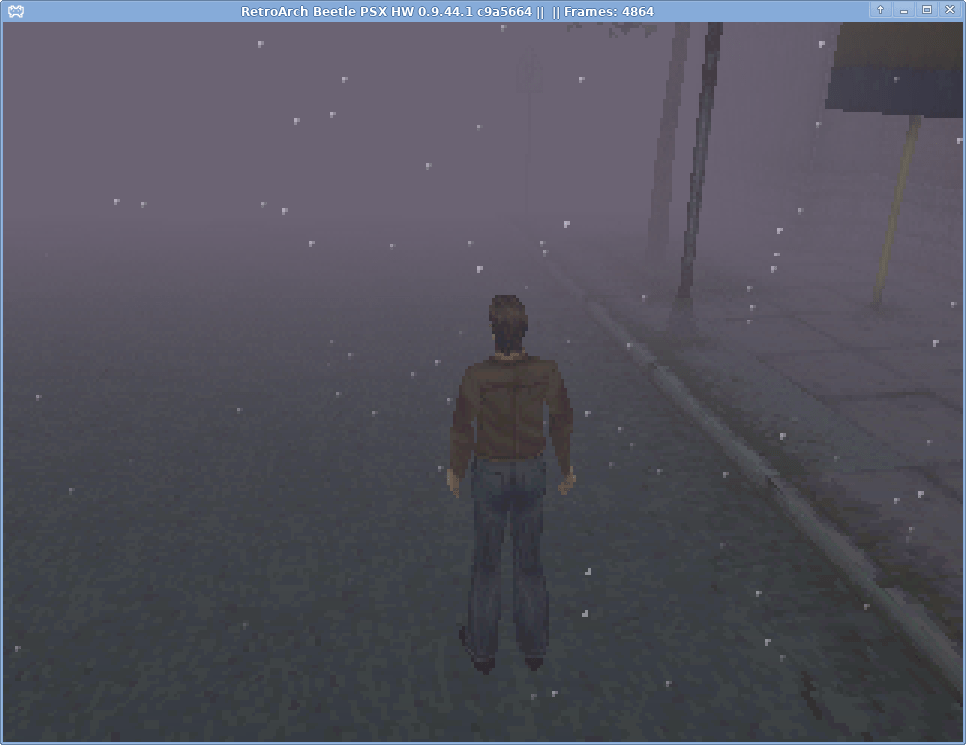 In this particular instance, however, the issue is because mask bit emulation is yet to be backported to the OpenGL renderer. This article may become out of date once that’s implemented.

If you followed our guide on installing Nvidia drivers from negativo17 repositories and Nvidia drivers, then you can install the vulkan package.

Due to an unknown reason (see beetle-psx-libretro#158), on X11 (i.e, if you are running XFCE, as opposed to Gnome which uses Wayland), you will get a “bad sector” error. The fix is to set beetle_psx_hw_cd_access_method = "precache" (this enables what the documentation refers to as “CD image cache”).

Since texture filtering is only supported with the OpenGL renderer, shaders are an alternative. However, since shaders are essentially a post-process effect, this will also affect pre-rendered backgrounds (like in Resident Evil). It can also be slightly slower.

If you are using the OpenGL renderer, download the glsl-shaders repository. If you are using the Vulkan renderer, download the slang-shaders repository. In order to load these shader presets, load a core/content then go to Quick Menu -> Shaders -> Load Shader Preset. Then look for files with the .glslp or .slangp file extensions. For convenience, you might want to install these to ~/.config/retroarch/shaders.

mednafen seems to have problems with pulseaudio; change the sound.driver to sdl. Note: this doesn’t seem to apply to RetroArch.

There are also .ini files that contain ROM information installed in $PREFIX/share. mupen64plus and the Rice video plugin need to find these files. If you are using the mupen64plus-ui-console, specify --datadir $PREFIX/share/mupen64plus at the command-line.

I’m getting a dlopen error¶

The console UI is compiled with the default path it looks for the core library, which is libmupen64plus.so.2. This is the reason why specifying LD_LIBRARY_PATH does not work. Although it uses dlopen, the console UI only searches in the place specified at compile-time or at the command line with --corelib, which takes an absolute path including the filename.

A cache of the textures are created after the first time and then read from the hard disk. This file can be found in ~/.cache/mupen64plus. So you have to delete this file everytime you make a modification for a game.

Video: GLideN64 Do not confuse this with glide64mk2, which seems to be made for ancient graphics cards

Note that the Rice video plugin is not compatible with cxd4.

How do I compile it?¶

All of the projects follow a pattern: their Makefiles are located in project/unix and they do not use autotools. You specify make variables like so:

The six mandatory projects you need to compile are:

There are a plethora of emulators out there, some of them good, most of them bad. VBA-M has reigned supreme as a gameboy emulator for many years and is recommended by pretty much every site out there. But overall, it has poor performance, is limited in its functionality, has a horrid codebase and the GTK version doesn’t even run.

There are some high quality alternatives:

Which one you use is a matter of preference, although they all have their pros and cons. Personally, I alternate between mGBA and MAME.

MAME looks for configuration in at least two places: /etc/mame/mame.ini and ~/.mame/ini/mame.ini. The latter overrides the former.

For some reason, fullscreen mode likes to eat up as much screenspace as possible with no regards to aspect ratio, etc. It’s not even true fullscreen mode. So I enable windowed mode instead. I disable sound by default instead opting to explicitly enable it on the command line if I wish. This is because MAME doesn’t seem to have a feature to mute or disable audio while the emulator is running. I disable filtering because I personally don’t like how blurry it looks. Finally, autosave is a feature that allows you to resume execution right from where you left off. While this may be a convenience if you accidentally close MAME or find saving to be boring, I like using in-game saves and don’t like having to soft reset whenever I start up MAME.

Also if you enable gl_glsl you want to set gl_glsl_filter to 0 (if you don’t like the bilinear filter.)

I’m assuming that you’re using the ini file in the previous section. In general, starting up MAME looks like this:

In this case, I’ve taken the native resolution of the gameboy color and doubled it. In this case, I want sound. And finally, the game will run at normal speed. It’s probably possible to add some further configuration with scaling and what not but I’ve found it to be tedious and inconsistent, so instead I wrote a UI script that has preset resolutions for certain consoles.

Emulators have tackled gamer’s impatience in different ways, by adding speed boosting options. For example, throttling, frame skipping, boosting (essentially key-activated throttling) and so on. These features tend to be broken, choppy or make the game unplayable. The emulators I’ve mentioned in the introductory section use a much more reasonable approach: an FPS target and in the case of MAME, a real-time speed option. The latter two approaches result in much less choppy gameplay, consistent results and more control over the speed of the emulation.

The difference between mGBA’s and gambatte’s FPS target and MAME’s speed feature is that the latter is relative to real time. That means an option of 2.0 will not make the game run at 120 FPS for example. Despite this, trying arbitrary speed values between 1.0 and 10.0 (for example, 10.0 being roughly 350%) doesn’t result in any choppiness. On the other hand, I’ve experienced choppiness in mGBA when setting an FPS target above 120.

In lieu of using a MAME front-end, I’ve opted to write a simple start-up script. A precursory glance at the list of front-ends seems to show either old projects or those written specifically for systems like Ubuntu. Rather than go out of my way to install and deal with even more software on my system that may not even work properly, I’ve found this script to work perfectly fine for my needs.

This requires zenity, a simple program that creates GTK dialogs.

If you have certain brands of USB devices, namely mice or keyboards, i.e Microsoft Nano Transceiver, it will try to load that as a joystick. Unfortunately, you have to manually clear the controls everytime the emulator loads and there doesn’t seem to be any way to fix this via the config. I’ve also tried to unsuccessfully patch it.

One workaround is to blacklist your device from udev. The udev-joystick-blacklist project on Github provides a script that does this for you and covers a range of devices known to be detected as joysticks. Of course, you do this at your own risk but I’ve had no problems with this approach.

An RPM for mGBA doesn’t seem to exist, but luckily the compilation process is painless. As is the case for all CMake projects, you want to create a build folder. Don’t run cmake directly in the source folder. Make sure to set a prefix with CMAKE_INSTALL_PREFIX to avoid polluting /usr.

Make sure to set LD_LIBRARY_PATH to the location of libmgba.so if you decided to build a shared library. Include the installation folder in your PATH for the binaries and man pages. Also located in the share folder are some shaders but they aren’t anything special.

Some of the variables that are important are:

The rest is discretionary, such as whether or not to disable the debugger. It lists libepoxy after OpenGL support, however it is simply a library that seems to deal with pointer safety. It really has no bearing aside from compilation.

You need Qt5, Qt5 Multimedia (for audio) and libzip if you want to load ROMs directly from zipped files.

Both mGBA and BGB emulate linking on the same computer.

You can now alternate between windows to send independent input.

This emulator allegedly requires two controllers for multiplayer to work properly. mGBA has a distinct lack of documentation and instructions, but here is a youtube video showing somebody who managed to get it to work (again, no instructions). If you want to try it yourself, you need to go to File > New multiplayer window rather than running two instances of the emulator.

To get Kega to run on Fedora, install the following dependencies:

The following assumes a new install.

Make sure all dependencies are met above. If you’ve already installed them and still have no sound and you already have a Fusion.ini file (meaning you’ve ran it once before), change ALSADeviceName to ‘default’ in Fusion.ini, open Kega, click ‘Sound’ and click ‘Disable Sound’ and ensure the checkmark goes away.